Winterfjell.de is a German website specializing in Scandanavian winter hiking and skiiing. Malte from Winterfjell, with help from Markus, recently checked out the Quadratic™ Tent System, judging it based on their extensive experience of extreme conditions.

In the test, Malte pointed out that standard two metre long guy cords are too short for winter expedition use. In severe conditions, longer cords make it much easier to really secure the tent, especially when using snow anchors and items like skis as pegs. We agree with this – and we now offer the Expedition Guy Cord 8 pack, which has eight three-metre long guy cords. Thanks for the feedback Malte!

You can find the review on the Winterfjell website (in German). Below are some of their comments translated into English:

I particularly like the inner tent. First of all, it is big enough for two people up to 1.90 m with winter sleeping bags… …With the Quadratic, two 60 cm wide mats fit side by side, making it large enough as a winter tent. The sitting height is sufficiently high at the entrances, in the middle you have enough headroom even with a thick sleeping pad.

What I like very much: The open door does not hang down, as with many other tents, but stashes in a large pocket right next to the entrance. There is also the classic loop for rolling up the door, but the pocket makes it so much easier.

There are enough small pockets inside the tent to store everything from glasses to watches to headlamps. There are also plenty of loops for clotheslines or an optionally available ceiling net. This makes it easier to keep things tidy and the inner tent looks very well thought out.

Regardless of the length, the guy lines look robust and the Lineloc clamps are simply the best. The two guy points on each side of each pole are also securely sewn to the pole tunnel. In addition, there are two guy points on the right and left above the entrance, so you have 16 guy points for cords.

The 40 denier ripstop nylon material siliconized on both sides is winterproof and the seams are well processed.

So far, the test tent would have been a good tunnel. But now the big difference comes into play. The Theory Works’ Quadratic tent has a tunnel for a side pole on each side. With these side poles, the tent can be stiffened significantly, making it less prone to cross winds. In principle, you get an almost completely free-standing tunnel and can worry less about finding the right campground in wind and storm.

Thanks to the side poles, the inner tent can stand completely tensioned without pegs, with only the two vestibules sagging. You could make it through a night between rocks on a mountain tour. Or you can just be more relaxed when your snow pegs don’t want to hold in the powder snow.

The weight of my configuration would weigh 3807 g according to the specifications. Then the surprise on the scales: It’s true! With which manufacturer do you still experience that?

In this configuration, the weight is of course not light for a 2-person tent, but it is certainly very storm-proof and absolutely suitable for winter!

This tent is a bunker. I would even count it in the same league as The North Face VE25 or Mountain Hardwear EV3 (now called ACI3).

The Quadratic beats the VE25 with its integrated pitching and lighter weight. Compared to the Quadratic, the EV3 has no vestibule for cooking, and no inner tent. The Quadratic tent is very fairly priced.

Right there I see a good niche for The Theory Works Quadratic expedition tent and would consider it as a mountain tent right away. 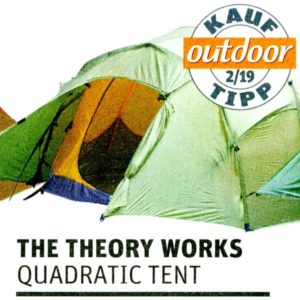 “Outdoor”, a leading German magazine has awarded the Quadratic™ Tent their “Buying Tip” in their February 2019 Issue. Some of their comments (translated) include:

Already without both side poles (300 g) it looks good, with them – like a rock in the surf. Continuous rain and wind have no chance.

Easy to set up with a little practice (inner / outer tent are coupled). To open the zips you have to reach into the vestibules, otherwise top handling.

With the Quadratic, The Theory Works offers an innovative, individually configurable all-rounder with terrific value for money.

Sven at freiluft-blog.de has been testing the Quadratic tent system. He tested the Quadratic Light Outer and Quadratic Winter Inner, together with Quadratic Expedition poles. Sven comments on the components, setup and practicalities of the tent. Here are some of his comments (translated):

Overall, the Quadratic tent system left a very good impression. The processing of the individual components is excellent and the system generally well thought out.

No matter which combination you choose, the price is quite fair for the offered quality and the unique modularity. If you travel a lot in different regions and / or in all seasons, such a flexible tent system could certainly be worthwhile.

To find out more about Sven’s test, you can read his review (in German) here. 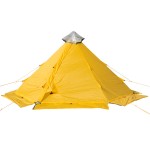 Modular Shelters are extremely flexible, but how do know which components you need to make the shelter you want?

We have made it as simple as possible with our new shop section “Configured Shelters”. Here’s how it works:

We hope this new feature makes it much easier to configure your shelter – but if you have any questions, we are always happy to help.

Between Saturday 7th November and Sunday 6th December 2015 we won’t be shipping any orders. If you place an order during this time, it should ship in the following week. During this time you can still contact us by email, so if you have any questions or comments please drop us a line.

The Theory Works® is taking a break for about a week. Between Friday 15th May and Sunday 24th May 2015 we won’t be shipping any orders. If you place an order during this time, it should ship in the following week. If you have an urgent enquiry, best send us an email – and we will try to get back to you. Have a great week!

We have added a new section on our website called “How to”. In this area, you will find slide shows with instructions on how to assemble and use our products. Simply use the arrows, keyboard, or the buttons under the show to step through the instructions at your own pace.

First up is a step-by-step overview of how to pitch a closed modular shelter, perfect for anyone new to the system. More detailed guides about specific situations and products are underway. Send us an email if you have any comments!

The Theory Works® took part in a meeting of the German Open Canoe club (GOC), in Gemünden am Main. Great weather, a nice location, and lots of friendly people made it a fun event. 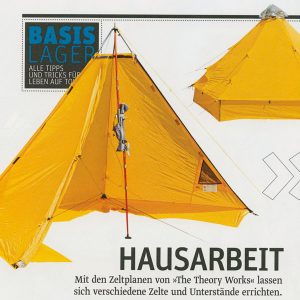 I am thrilled by the concept and implementation of the shelter. It’s fun to try out so many different configurations. I was looking forward to trying it out and already ordered additional components.
The yellow fabric did not attract insects and I tell you, there were lots around at the weekend. The colour is really pleasing when you are inside the shelter.
– Julian M.